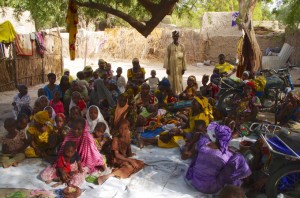 Despite the Nigerian army’s claim that those fleeing the troubled part of northern Nigeria are not Nigerians, and that the crisis has not displaced as many Nigerians as widely reported, the UN refugee agency has said thousands of people are fleeing to Chad, Niger and Cameroon as the crisis in the country deepens.

UNHCR officers said on Tuesday that up to 3,000 refugees had arrived in Cameroon amid reports of at least 6,000 people escaping to Niger over the past weeks as the confrontation between the Nigerian army and the Boko Haram group intensified in the country’s northeast.

Africa spokesperson for UNHCR, Fatou Lejeune-Kaba said, “The immediate priority is to secure food and shelter as refugees are entering extremely harsh and difficult areas”.

Cameroon had initially closed its border with Nigeria to prevent members of Boko Haram from entering, but after June 11, the border was re-opened, the UNHCR said.

With fighting only intensifying, and about 3,000 people arriving between June 11-13 alone, there are concerns that this may be the start of a large exodus from the region.

The Federal government embarked on a major military offensive on May 15 to root out the Boko Haram group responsible for a series of bloody attacks in Nigeria over the past four years that has claimed many lives, with a state of emergency imposed on Adamawa, Borno and Yobe states.

The UNHCR said crossings into Cameroon began a week ago, with most of the refugees being women and children.

Refugees are being hosted in churches and schools, and relying on food from the local population.

We are working with the authorities to relocate the refugees to safer places away from the border, away from possible fighting, Lejeune-Kaba said.

Meanwhile in Niger, trucks carrying aid was dispatched from Niamey to the southeastern Diffa region, where more than 6,000 people have arrived from northern Nigeria in the past weeks. Military sources however said most of the so-called Nigerien refugees are just Nigeriens returning home.

Most of the new arrivals in Niger traveled on foot from rural villages across the border and from Maiduguri and Baga towns.

In Chad, refugees have been arriving in small numbers, saying their homes were destroyed after the military accused them of harbouring Boko Haram fighters.