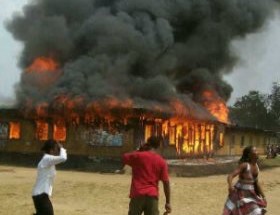 The Coordinating Centre for Human Rights (CCHR) has called for the removal of the Police Commissioner in Akwa Ibom State, Umar Gwadabe and a review of the leadership structure of the University of Uyo, following the killing of three students of the university recently by the police.

The convener of the centre, Innih Archibong and secretary, Muhammed Hussein, in a statement said, “Information available to us indicates that general dissatisfaction among students was left unaddressed until it festered and found violent expression in an otherwise peaceful demonstration on June 12, 2013.

“CCHR learnt that instead of addressing the students and assuring them that something would be done about their complaints, the university authorities called in the police who shot and killed at least 2 students and wounded others.

“The students then reacted to the killing of their colleagues by setting fire to the vice chancellor’s office and razing/ damaging important office buildings within the main campus.

“CCHR strongly condemns violence in all its forms and recommends the payment of adequate and exemplary compensation to families of the students killed by the police” the statement read.