US spies have also hacked China’s prestigious Tsinghua University in Beijing and Asia Pacific fibre-optic network operator Pacnet, the Post quoted Snowden as saying. Analysts however said Snowden cannot be totally believed on this as he might have said it to gain a little support from China as an extradition to the US seem imminent after he was charged with espionage.

Snowden, who worked as a contractor for the National Security Agency (NSA), has been charged with espionage by the US after revealing a massive spying program and has gone to ground after fleeing to Hong Kong.

“The NSA does all kinds of things like hack Chinese cell phone companies to steal all of your SMS data,” Snowden said in the interview conducted on June 12.

Government data shows almost 900 billion text messages were exchanged in China in 2012.
The claims followed soon after a report in the Guardian in which he claimed the British government’s electronic eavesdropping agency had gained secret access to fibre-optic cables carrying global internet traffic and telephone calls.

Britain’s Guardian said that Government Communications Headquarters (GCHQ) had started processing vast amounts of personal information — including Facebook posts, emails, internet histories and phonecalls — and is sharing it with the NSA. 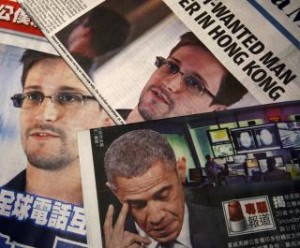 The Post has previously quoted Snowden saying there have been more than 61,000 NSA hacking operations globally, targeting powerful “network backbones” that can yield access to hundreds of thousands of individual computers.

He said these included hundreds of targets in mainland China and Hong Kong. US had recently accused China of hacking into its network.

Snowden told the Post in the report published Saturday that Tsinghua University, which counts China’s President Xi Jinping and previous President Hu Jintao among its graduates, was the target of extensive hacking by the US.

The university, which is home to the mainland’s six major backbone networks from where internet data from millions of Chinese citizens can be gathered, was breached as recently as January, he said.

In 2009, the NSA also attacked Pacnet, the owner of one of the region’s biggest fibre-optic networks, the Post reported, citing information provided by Snowden.

Pacnet, which is headquartered in Hong Kong and Singapore, owns 46,000 kilometres of fibre and operates in 13 countries, according to its website.

A US justice department official has confirmed that a sealed criminal complaint has been lodged with a federal court in Virginia and a provisional arrest warrant has been issued for Snowden, who fled to Hong Kong in May.

But Hong Kong government officials Saturday remained tight-lipped as to whether they had received such a request and whether Snowden had been approached.