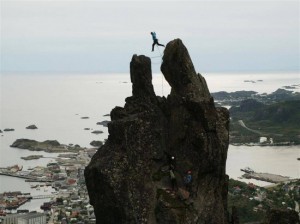 Up until a century ago, the Svolværgeita or Goat’s Horns rock tower had never been conquered, but these days not only has it become one of the most popular climbing pinnacles in Norway, but thrill-seeking mountaineers defy death by jumping between its granite horns.

Goat’s Horns peak was first climbed in 1910 by Carl Rubenson, Alf B. Bryn, and Ferdinand Schjelderup, a fantastic trio who managed to conquer two other virgin summits (Trakta and Stetind) on the very same trip. Climbers can go up Svolværgeita on the original route of its first climbers, just to see how good these three pioneers were in their time. There are several routes up the Goat’s Horns, but once at the top, many members of the mountaineering community follow the decades-old traditions of jumping from Storhorn (big horn) to the Lillehorn (little horn), over a 1.5 meter gap. It’s considered the perfect mountain climbing stunt, because it’s possible to pull off, but hard enough to get your heart pumping. Jumping 1.5 meters across may not seem like a very difficult task, but one wrong move and you’ll have to rely on the safety harnesses to save you from a 150-meter fall to the foot of Goat’s Horns pillar.

And if the traditional jump between the Goat’s Horns wasn’t scary enough before, a 3 cubic meter section of the little horn fell off in the Spring of 2008. The piece that fell off was from the inside and front corner of the rock block, which means the part that climbers use to land on is now missing. Apparently this only makes the jump more exciting for rock-climbers in search of an adrenaline rush. I have to say the feat does make a great photo, though.

Watch the video below for a POV experience of jumping the Goat’s Horns: