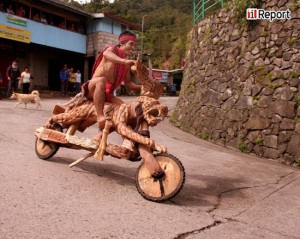 The municipality of Banaue, in the Philippines, is widely known for its spectacular rice terraces, but few people know it’s also the setting of a traditional race that has daredevils riding wooden scooters downhill at speeds of up to 50 kph, without any kind of protection.

The wooden scooter has long been the preferred means of transportation for Ifugao (Philippine for “people of the hill) in Banaue, and is still used today, as a cheaper alternative to gas-powered motorcycles and scooters. They were created centuries ago to help people travel downhill faster. The men-folk had to walk up the surrounding hills almost every day to gather firewood and tend to their rice crops, and carrying the load back down was an exhausting task that took them hours to complete. People started making light scooters almost entirely out of wood, and pushed them uphill whenever they had something to transport back to their village. At the top, they would simply strap the load on both sides of the vehicle and let gravity take them back down in a matter of minutes. In time, making wooden scooters became an art form, and masters of the craft began decorating them with all kinds of designs, from local animals and birds to human heads. Today, the Ifugao still celebrate this useful invention by participating in a seven-kilometer wooden scooter race down a steep road along the famous Banaue Rice Terraces.

Every year, during the Imbayah Festival, Banaue’s woodcarving artisans showcase their most intricate wooden scooters in a traditional race that attracts visitors from all around the world. Barefoot and wearing nothing but their simple ethnic attire, these Ifugao daredevils race down a seven-kilometer windy road down to the town of Banaue. Powered only by the force of gravity, the home-made scooters reach speeds of 50 kph, meaning one wrong move could cost racers their lives.