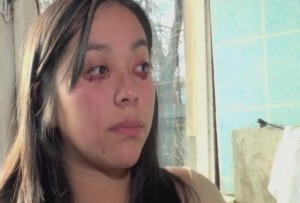 20-year-old Yaritza Oliva is living a nightmare. For the last couple of weeks the girl from Purranque, Chile, has been crying tears of blood and so far no one has been able to explain her mysterious condition.

Yaritza first noticed blood tears coming out of her eyes about two weeks ago, but due to her family’s poor financial situation, she couldn’t seek any professional help. The only ophthalmologist who attends at the local hospital in Purranque a few days a week has so many scheduled patients that he wouldn’t see her without an appointment. One of the few times she was consulted by a professional physician was when she was transferred at the hospital of Puerto Montt, where doctors were baffled by her condition, but could only give her some eye drops for the burning sensation she feels when the blood pours from her eyes.

At first, Yaritza believed she suffered some kind of extreme conjunctivitis or infection, but after seeing photos and video footage of the girl crying blood,Dr.Alexander Lutz, an ophthalmologist at Las Condes Clinic, excluded those possibilities saying they have very different symptoms. He argued the mysterious condition could be caused by blood clotting problems, alterations in platelets or by the use of certain medications. An expert would have to check if there is bleeding in any other areas of Yaritza’s body, but she didn’t reveal anything of the sorts in the video interview with Chilean website 24 Horas.

Yaritza Oliva cries blood several times a day, and says the pain is indescribable, but for now all her family can do is wipe away the red tears and help calm the burning sensation. The girl, who at one point believed her condition was a stigma won’t leave the house, afraid of what people might think when they see her blood tears. And if her bizarre affliction wasn’t enough, the 20-year-old Chilean also suffers from a bizarre syndrome that causes her limbs to dislocate frequently leaving her incapable to walk or use her hands.