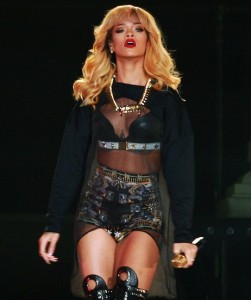 Rihanna struck a man in the face with her microphone during a concert in Birmingham earlier this week.

The pop superstar was caught on camera violently lashing out after jumping down from the stage to perform up close to her fans.

In the video footage, the 25-year-old is seen singing into her microphone and greeting fans as she walks along the barrier containing the crowd.

But her mood suddenly changes when she appears to be manhandled, prompting Rihanna to turn around in anger and swing her mouthpiece at a member of the audience.

Her enraged reaction seemed to be triggered by someone who was grabbing her sleeve and refusing to let go.

She addressed the incident on Twitter following her show and defended her attack, ranting: “Purpose!!! That b**ch won’t let me go.”

Meanwhile, a man has been arrested after he was caught on the roof of Rihanna’s Los Angeles home.

Fortunately, security guards grabbed the intruder before he had the chance to enter the star’s Pacific Palisades property.

Cops were called around 10 p.m. and the quick-witted minders handed over the 26-year-old assailant to them.

The man has apparently claimed he did not know he was trespassing on Rihanna’s roof, though police sources say he had a Google map of the area on his mobile phone.
http://www.youtube.com/watch?feature=player_embedded&v=WBp_pm7xjlU
Naij