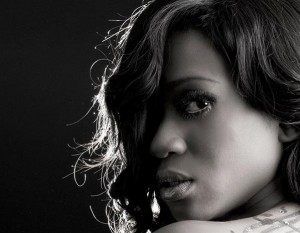 Female songbird Aituaje Iruobe, also known as WAJE has been around for the past half-decade, contributing to the commercial success of artistes like Banky W, M.I and P Square. Banky W’s Thief My Kele, M.I’s One Naira and P Square’s 2009 remake of Omoge Me largely owe their successes to WAJE’s pretty flawless singing ability.  Her vocal backing to these songs rendered them the kind of touch a potential hit song requires.

The Nigerian music industry has a fairly balanced ratio of successful, mainstream female and male musicians. The industry has conspired to strike a fair balance across board, allowing far greater numbers of female musicians to join the community.

You can call her the female equivalent of Chocolate City act Brymo; she perfectly fits that description. Just like Brymo, WAJE also offers that lifeline to a song that needs a complete, if not different feel or interpretation to get it home.

Omoge Me was more appreciated after release, because of the way it finally came across; P Square found a better act in her. The duo had seen her perform at a concert in Enugu, Nigeria, and fallen for her craft. Later, she sampled one of their songs and sent it to them for appraisal.  They loved it, and that sparked the beginning of the creation of the hit remake of Omoge Me. She also got featured on the song Do Me. That also has its accompanying success story.

M.I’s One Naira however, was the song that introduced her to a broader market; she virtually took it home, proving a fine talent in transit. One Naira became the song she would be known for; her appeal grew afterwards. What the collaboration with M.I, regarded Nigeria’s most successful rap act of the last decade, did to her, was to build her up for bigger associations

She went on tours, performed at A-List concerts, and also expended her reach. Across Africa, she became a hot commodity, with most promoters calling her for shows either with M.I as a unit or as a single act. It was a refreshing mainstream career push.

Like most musicians, she cut her teeth in singing in church, performing with the choir. She got counsel from close family relations to take to music, professionally. She heeded to that advice, and has since seen her dream come to live.

Her 2009 single Kolo got a lot of rotation on rural-urban radio, just as four others So Inspired, Na The Way, For A Minute and I Wish, produced by local hands Paul Okoye and Papi J. Kolo was released months after she had taken part in the MTV Base Reality television show Advanced Warning, which was offering a platform to artistes on the verge of a commercial breakthrough. She was first runner up.

Over time, she’s become one of Nigeria’s finest female voices, if not the best.  She’s shared a stage with Haitian-born American act Wyclef Jean and also opened for Keri Hilson.

In the last six years, she’s been nominated for, and won so many awards you would think she’s been around for two decades. In 2011 she was nominated in the Most Gifted Female Video category at the Channel O Music Video Awards. She was also a recipient of Best Female Vocalist at the 2011 Headies, Nigeria’s biggest Hip Hop Awards scheme.

The University of Nigeria graduate has so far lived what can be considered a successful career. W.A.J.E’s debut album Words Aren’t Just Enough is out in stores