Lagos state Governor Babatunde Fashola says 70 roads have been awarded for reconstruction in the state in 2013. 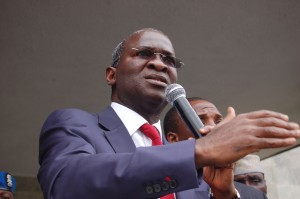 The governor said this on Monday during a joint courtesy visit by executive members of the Nigeria Bar Association, Lagos and Ikeja branches, led by Mr. Taiwo Taiwo  and Mr. Monday Ubani respectively, at the Lagos House, Ikeja.

Fashola said the reconstruction of additional number of roads was to ensure that more roads were motorable in the state.

He added that the proposed projects had increased the number of roads awarded since the commencement of his second term to 230 roads.

“We have already completed about half of the roads we set out to achieve. But again, we can only award that much if we were able to complete much. That was why this year’s project was based on completing the inner roads in the state.”