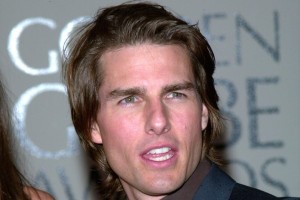 While Tom Cruise was brought up Catholic, he was introduced to the Church of Scientology by Mimi Rogers at age 23. He quickly advanced to the top and now has the rank of “Operating Thetan VII.” Many Scientologists believe Cruise has special telekinetic powers, and he is considered to be the third highest ranking member below L. Ron Hubbard and David Miscavige.

Cruise has been involved with a number of different women through the years. He first was involved with Rebecca De Mornay from 1983-85 before meeting his first wife, Mimi Rogers. They divorced in 1990 when Cruise met and fell in love with Nicole Kidman on the set of ‘Days of Thunder.’ Tom and Nicole were married and adopted two children, but things fell apart and they eventually divorced in 2000.

Tom Cruise became a real life hero four different times! In 1996, he took a woman injured in a hit-and-run car accident to the hospital and paid her $7,000 medical bill. In the same year he saved some young boys from being trampled by a crowd of people, and rescued people from a fire while sailing on his yacht.

Two years later, he saved a woman from being mugged by chasing away the attackers along with his bodyguards.

Tom Cruise got his first movie role in 1981 in ‘Endless Love,’ but he became extremely popular in 1986 after starring as Maverick in ‘Top Gun.’ He has acted in nearly 40 different movies over the years. A few of Tom Cruise’s other memorable films include:

Show Me the Money

Tom Cruise was paid just $75,000 for his role in ‘Risky Business,’ but his biggest payday of $70 million came from ‘Mission: Impossible III.’ Tom Cruise’s estimated net worth is somewhere between $250 million and $300 million.

Tom Cruise has visited Japan more than any other Hollywood celebrity. He often goes to the country to promote his new movies, and he has an army of young Japanese fans that are obsessed with him. To celebrate his support, October 10, 2006 was officially declared as Tom Cruise Day in Japan.

Tom Cruise is one of few celebrities to ever wear real braces. He wore them back in 2002 to fix his misaligned bite. It’s believed that he wore 3M Clarity braces, which are nearly invisible at a glance

Tom Cruise earned his pilot’s license in 1994 and now owns as many as five private planes. He owns a $20 million Gulfstream IV that has a hot tub and a movie screening room. However, his favorite aircraft is his P-51 Mustang fighter plane.

Tom Cruise was born with dyslexia and has always had problems reading. His education also suffered due to the fact that he attended 15 different schools over 12 years.