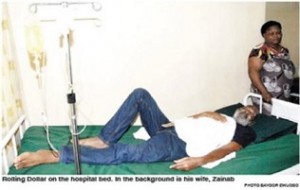 It was reported last week that the octogenarian musician, Pa Fatai Rolling Dollar, was unable to balance his hospital bill at Ahmadiyya Hospital, along Abeokuta Expressway, Lagos where he was bedridden for two weeks.

“One of Nigeria’s oldest and most prolific musicians was yet to leave Ahmadiyya Hospital because he has been unable to come up with N29,000, balance of his hospital bill – a paltry sum for a musician of his caliber and a situation which may keep the octogenarian in the hospital longer,” the reporter said.

Though, people have rallied round the old man and have sorted the hospital bill as we gathered, notwithstanding, such a small amount shouldn’t be an issue for a legend like him. This is a man who was very close to the former governor of Lagos, Asiwaju Bola Ahmed Tinubu but he no longer has his contact. Hear him ““I was close to the former governor, Bola Tinubu, but I don’t have his contact anymore. The man loves me”.

While in hospital, Rolling Dollar was said to have expressed his disappointment on the trip and allegedly said Atawewe, the Fuji artiste went away with his money and he was never paid a dime in the US Tour.

Hear his ordeal in America “I went on stage and performed even though the money was not given to me. When I finished performing and went to sit down, my body was no longer normal. I told somebody to take me to the car and put on the heater.

It was about 3.00 a.m. and that was where I started feeling the pain in my leg. It was very cold in America then”, he explained. He managed to return home to Nigeria by May 17.

The shows were to hold in New York, Maryland, New Jersey and Texas but only New York and Maryland held. New York went bad and I was not even paid for the show there. This is because trouble broke out and some people made away with the money, including, he said, Atawewe, a Nigerian fuji musician that performed at the event, duping even the promoter, Mr. Samson Raji.”