Roger Brown, of Brazil. Ind., woke up Wednesday morning to find his trusty puppy licking his feet. The dog had also chewed two of his toes off. 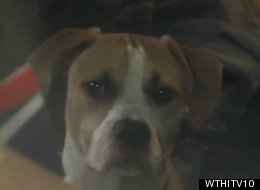 According to WISH TV, the 6-month oldpit bull puppy — named “Bo” — completely gnawed off Brown’s big and small toe on his left foot before Brown wake at around 4:30 a.m.

Brown is diabetic and was suffering from a foot infection, which is likely why he didn’t feel the affectionate gnawing.

Police do not consider the incident an attack.

The man told WTHITV that he believes it was his own fault for not properly wrapping up the blistering infection on his foot. According to the New York Daily News, doctors believe that Bo may have been trying to help his owner.