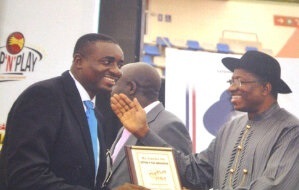 Nollywood actor, Emeka Ike has been appointed a Rhythm ‘N’ Play Ambassador by President Goodluck Jonathan in recognition of his selfless service to humanity.

The ceremony was held last Thursday at the National Sports Stadium, Abuja. He was decorated alongside six other super stars including: Victor Moses, the Chelsea Football Club of England’s player, and Nigeria’s top music rapper M I.

As part of its nationwide grassroots sports development campaign, National Academicals Sports Committee (NASCOM) on June 6 got the Presidency backing for its noble initiative, when Mr. President launched Rhythm N’ Play in Abuja.

“There was the need to reposition sports in order to facilitate the mass participation and early discovery of young sporting talents at the grassroots.

At the Presidential Retreat held last year, NASCOM was identified as a key component of government’s efforts at developing sports at the grassroots and Rhythm ‘N’ Play is a brand created by NASCOM and will serve as its flagship campaign to drive and revolutionise grassroots sports in Nigeria,” he said.


He added, “Rhythm ‘N’ Play will rely heavily on the use of music, celebrities, volunteers, news media and other elements of pop culture to amplify and realise its objectives. Mr. President launched the campaign on June 6, first in Abuja, and will later on June 14, launch it in London, United Kingdom (UK) targeting the Nigerian youths in Diaspora.

As a popular Nollywood actor, Emeka Ike has been commended from different quarters for fighting for Nigerian people whose rights and voices are trampled upon. Recently, he was also appointed a member of the board of Directors of Institute For Humanitarian Studies And Social Development (IHSD). And not long after that, he was appointed into the Board of Okigwe Zonal Development Authority (OZDA).

His company CIS Movies and Entertainment Limited was recently commissioned by the (IHSD) to organize the first ever Humanitarian Heroes Award.

Meanwhile, only recently, the actor expanded his investment in the education sector by establishing another school in Ghana, which is different from St Nicholas college, his secondary school located in Magodo Estate, Lagos. His school in Ghana which is known as My Academy West Africa, is an affiliate of Ghana’s premier institute National Film and Television Institute (NAFTI), a school he says is founded on the philosophy that “practical learning” combined with best industry practices is more valuable than only theoretical study for filmmakers and actors.