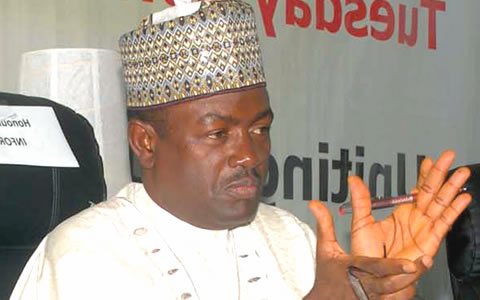 Edo State governor, Comrade Adams Oshiomhole has berated the Minister of Information – Mr Labaran Maku for claiming that most of the motorable roads in the state were constructed by the Federal Government.

Maku had recently stated that the federal roads in Edo were so smooth that one could spread a mat and lay on it but apparently piqued by the minister’s statement, Oshiomhole, who spoke through his Special Adviser on Media and Publicity Prince Kassim Afegbua, said the allegation was nothing but a “height of crass irresponsibility and rudderless leadership”.

He said it was not appropriate “for any serious-minded public officer to mount the podium of public discourse to advertise falsehood and distort facts so unashamedly to please the hollow rituals of his master’s ears.

“Rather than own up to failure and inability to meet certain targets, they go about whispering ‘sweet-nothings’ as the lullabic tinge to send their master to sleep when the nation is suffering from unimaginable infrastructural decay”, he said.

The governor also noted “The fact that Edo and Lagos states did not grant space to Labaran Maku and his co-travellers on that ill-advised good governance tour, is not enough grounds for him to be telling Nigerians bogus lies in such an inelegant manner, undeserving of a public officer feasting on tax payers money.

“We will implore Labaran Maku to go into the corner of his bedroom and ask God for forgiveness over his rabblerousing presentation in the name of being a government megaphone, presenting apocryphal report card and deceiving a nation that is already livid with anger over PDP’s non-performance”, he said.