Woman Buries Husband In Backyard, Told Police She Was Too Poor To Pay For Funeral 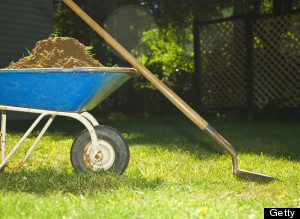 Unable to pay for a funeral, an Apple Valley woman reportedly told sheriff’s deputies she was forced to bury her husband in a shallow grave in the couple’s back yard weeks after the man died, according to San Bernardino County Sheriff’s officials. Investigators are trying to determine if the man died of natural causes.

The identity of the deceased man has not been released. The woman has also not been identified.

Apple Valley deputies were called out to a home in the 16000 block of Navajo Road around 1 p.m. Wednesday for a welfare check on a 63-year-old man, according to authorities.

At the home, deputies found the man’s 59-year-old wife who told deputies her husband, who has not been identified, had died weeks earlier, according to sheriff’s officials. Unable to pay for a funeral, she reportedly told officials she buried him in the back yard.

The man’s body was found in a shallow grave and his body did not appear to have any obvious signs of trauma.

The woman was not arrested pending a cause of death ruling from the coroner, according to Cindy Bachman, spokeswoman for the sheriff’s department.

It’s a violation of the state’s health and safety code to bury a human body anywhere other than an approved and recognized cemetery.