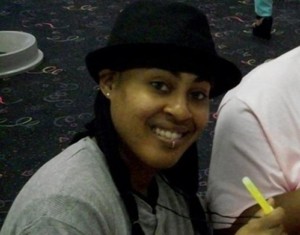 Christine Calderon (pictured) and a male friend were doing the typical touristy thing of taking pictures along Hollywood’s Walk of Fame in California on Tuesday evening, when they were approached by a trio of panhandlers.  When Calderon reportedly refused to hand over $1 to the men, she was stabbed repeatedly in her upper torso by the group, reports the New York Daily News. The 23-year-old woman and her unidentified male companion were snapping away cellphone photos of the famed Hollywood tourist spot, when they spotted three suspects holding up signs and asking for money.  The sign held by one of the men reportedly read,  “F—k You Give Me A Dollar, Please,”  with a smiley face. Calderon and her friend took a picture of the sign because they reportedly thought it was hilarious. One of the suspects, however, didn’t find any humor in the young Lynwood, Calif., resident’s move and allegedly lashed out, stating, “If you’re going to take our f—king pictures, you need to give us money!”  The man’s words ignited a nasty argument between his cohorts and Calderon, with the altercation taking an ugly turn when one of the men stabbed Calderon multiple times, according to tourists in the area. Passersby reportedly rushed to help the young woman to see if they could stop her profuse bleeding; according to witnesses, Calderon was covered in blood.