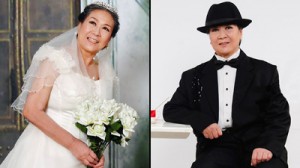 Liu Fu, 76, always dreamed of having a wedding photo album.

When she got married Fu was very poor and could not afford to pay for a photographer.

“We didn’t have much money when we married so my husband Feng and I had a small wedding. But I’ve always wanted a proper wedding album,” Fu said.

A studio in Zhengzhou, Henan province, China took the “wedding photos” where Fu posed as both bride and groom in the photos. She had a hairdressers, makeup artists and wardrobe experts restyling her for her double take.

Fu was dressed as the bride in a beautiful white wedding gown then she was changed into a groom’s outfit. “It was wonderful. The answer to all my dreams. My only regret is that my husband couldn’t share it,” she said.