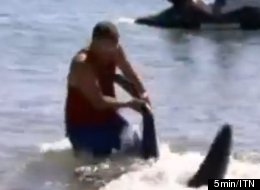 A British man who received worldwide attention for wrestling a shark away from kids on an Australian beach has been sacked from his job as a result.

When Paul Marshallsea, 62, made the daring rescue at Australia’s Bulcock Beachin Queensland in late January, he was actually on sick leave from his job in Great Britain.

Marshallea and his wife, Wendy, work for the Pant and Dowlais Boys & Girls Club, a children’s charity in the town of Merthyr Tydfil, Wales, but they took a two-month break from their jobs, claiming work-related stress.

However, when charity trustees saw the video of him shark wrestling, they decided the couple had been dishonest and fired them, the Telegraph reported.

The letter explaining their position read in part, “Whilst unfit to work you were well enough to travel to Australia and, according to recent news footage of yourself in Queensland, you allegedly grabbed a shark by the tail and narrowly missed being bitten by quickly jumping out of the way.”

A second letter obtained by the BBC added, “The breakdown of the trustees’ confidence and trust in you and your ability to perform the role is so great that we find that dismissal is the only course of action we can recommend.”

Marshallsea insists the stress was real and went to Australia on the advice of his doctor.

He also believes his employers should have given him a pat on the back, not a kick in the keister.

“If I hadn’t gone in to save the kids on that beach that day my wife and I would still have a job,” he said, according to the Independent. “Where do I now get a job? There’s not much call for shark wrestlers in Merthyr Tydfil.”