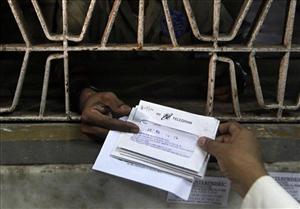 We’re not sure if it’s more surprising to learn that the last telegram in the world will be sent next month… or that people are still sending telegrams somewhere. They are, though: 5,000 telegrams are still sent every day in India. But that’s all coming to an end on July 13, when the country’s state-owned telecom company, BSNL, will end its telegraph service for good, the Christian Science Monitor reports.

At the medium’s peak in 1985, Indians were sending 60 million telegrams a year. But with the rise of cell and smart phones, BSNL says it’s losing $23 million a year to keep the service running. Nevertheless, some devotees believe the telegram still plays a vital role in the country. “I am a regular user of the telegram and it is an important tool for activists,” says fan AP Tripathi. “For example, a telegram to a court informing them of illegal detention of a citizen by the police is taken as a writ petition.” Tripathi is so passionate about the telegram, in fact, he has even threatened to go on a Gandhian fast unless the decision is overturned. He notified the government of his intentions … via telegram.