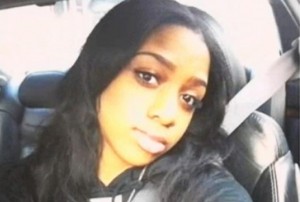 Eighteen-year-old Al-Muqqadin Means (pictured below ) allegedly shot his ex-girlfriend, Aquilla Flood (pictured), to death because she refused his prom invite, according to the NJ Star Ledger.

After Means’ sister reportedly warned Flood of his violent tendencies, the pair reportedly broke up in February.

Means allegedly began making threats against Flood shortly after. In response, Flood reportedly begged her mother to move in to a new apartment, though she didn’t reportedly inform her about the threats.

According to Aquilla’s mother, Nicole Flood, Means accessed their apartment through a fire escape, shooting Aquilla while she slept, but two law enforcement sources told the Star-Ledger that Aquilla let Means in to her apartment last Wednesday.

Nineteen-year-old Tasjoin Williams was also arrested with Means and charged with an unrelated robbery attempt. It is not known if he had any connection to the murder.

While Flood’s family is relieved Means was caught, they know it can’t undo what has been done.
“We are extremely excited and happy for that, but it still doesn’t bring our beloved niece and daughter back,” said Naimah Hicks, Flood’s aunt.

Means is being charged with unspecified murder and weapons charges. He made his first appearance in Newark’s Superior Court Thursday morning.

Flood found her daughter’s body lying in a pool of blood hours later.
Authorities captured and arrested Means inside a Newark apartment Monday.

Flood had recently been voted prom queen at Campus High School in East Orange. She was supposed to receive her crown Thursday and graduate Saturday. Instead, she was buried Wednesday morning.