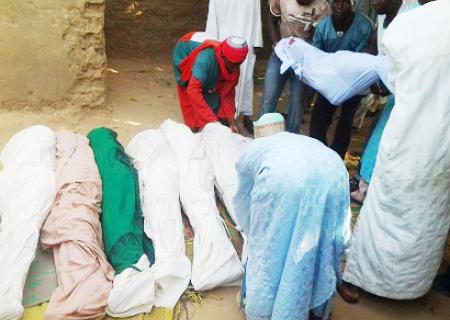 The Police Command in Zamfara said on Saturday that it had arrested two suspects allegedly connected with the killing of more than 30 persons at Kizara, Tsafe Local Government Area of the state.

The suspects were paraded to Governor Abdulaziz Yari at Kizara by the state Commissioner of Police, Mr. Usman Gwary, while conducting the governor round the deserted village.

Gwary said the suspects were apprehended by a joint patrol of the police and military, assisted by local vigilante members, at two hide-outs in neighbouring villages.

The commissioner assured that the patrol team would continue hunting the killers until they were all arrested.

Responding, Yari advised the police commissioner not to allow anything happen to the suspects until reliable information was obtained from them or “you would be held responsible.”

He advised that the suspects should be given heavy security protection and that they should be moved immediately to Gusau for more questioning.

The governor, who was away on an overseas trip when the incident occurred, prayed for the repose of the souls of the dead and promised to assist the villagers.

The News Agency of Nigeria recalls that about 150 gunmen invaded the village in the early hours of June 18, during which 30 persons were killed.

President Goodluck Jonathan had sent a Federal Government two-man delegation, made up of the Inspector-General of Police, Muhammad Abubakar and the Minister of state for Works, Alhaji Bashir Yuguda, to commiserate with the villagers and improve on the security in the area. (NAN)