Famous veteran Yoruba actress, Ronke Alausa, has joined the telecoms war as she wears the jersey color of Etisalat. 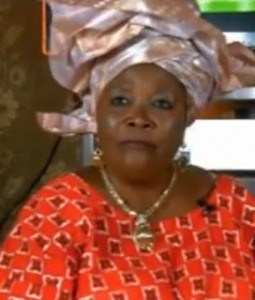 News has been confirmed that gentle and calm actress was paid a whopping N10 million to become an Ambassador on the stable of Telecommunications Company, Etisalat.

The actress confirmed the report as she revealed, “It is true that I signed a year deal with Etisalat Nigeria as one of their brand Ambassadors, It’s a good deal and a very good pay.”

Ronke Alausa aka Iya Ereko has already made her debut by starring in one of the company’s latest television commercial. Also, her face can be seen on several Etisalat’s billboard across the country.

Etisalat have come late to the party after they lost popular comic actor, Hafeez Oyetoro, commonly called Saka to rival MTN; although Etisalat have made reports that the comedian would be porting back to Etisalat very soon.

On a related matter, sources also reveal that the Kokomaster D’banj, has also signed an endorsement deal with Etisalat. The artiste has allegedly already shot the commercials which will soon go on air.

Although the news isn’t official yet till the official announcement later this month, the deal that is reportedly worth N250 million. If the news about the amount is right then it would make D’banj, the single highest paid showbiz personality in Nigeria