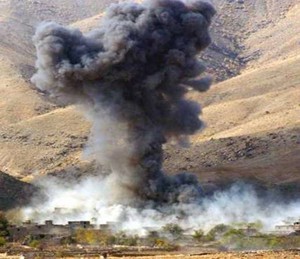 Scores are reported dead across Afghanistan amid a pair of bombing attacks and two military operations in the eastern part of the country.

As many as 14, most of them civilians, died in separate bombing attacks in Zabul and Kandahar provinces, local officials said.

A further 12 were injured in the southern Afghanistan attacks.

Twelve civilians, mostly children, were wounded in that explosion, which struck in a residential area on
Sunday night, he said.

But the presidential office put the death toll higher, at 11.

“According to Zabul provincial governor office, 11 of our compatriots were martyred and 12 others injured,” President Hamid Karzai’s office said in a statement.

In adjacent Kandahar province, a mother was killed along with her two daughters when a roadside bomb placed by Taliban insurgents went off on Monday, the governor’s spokesman said.

“The incident took place this morning in Spin Boldak district, in which a woman, with her two … daughters (aged 14 and 15), were killed,” Javed Faisal told DPA.

Karzai’s office condemned the attacks, saying culprits of attacks during the holy month of Ramadan will be responsible before God.