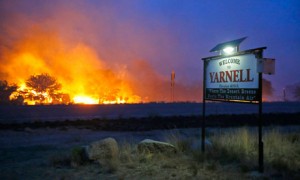 No fewer than 19 firefighters were killed on Sunday as they battle a fast-moving wildfire in Arizona, officials said, in the deadliest incident of its kind to have hit United States in decades.

The firefighters died while racing to contain the Yarnell Hill wildfire north of Phoenix, in what Arizona governor Jan Brewer called “as dark a day as I can remember.”

The deadly blaze came amid baking temperatures and tinder-dry conditions across the US south-west, with temperature records broken over the weekend in Arizona and California, and follows an already deadly wildfire season across the region.

In a statement issued from South Africa during US President’s ongoing Africa visit, Barack Obama paid tribute to those who lost their lives in the “terrible tragedy”.

“They were heroes — highly skilled professionals who, like so many across our country do every day, selflessly put themselves in harm’s way to protect the lives and property of fellow citizens they would never meet.”

The Yarnell Hill fire, believed to have been ignited by lightning, broke out on Friday and according to local forestry officials has already covered 2,000 acres, spreading rapidly through the dry, forested area amid strong winds.

“It appears the firefighters had to deploy their fire shelters and were overcome by the fire,” said an update on the Northeastern Arizona Public Information website, referring to last-ditch protection equipment.

Hundreds of residents of Yarnell and Peeples Valley were being evacuated, officials said on a fire alert website, as the blaze continued to tear through the area.

Prescott Fire Chief Dan Fraijo said he was “devastated” by the loss of lives.

“We just lost 19 of some of the finest people you will ever meet,” he said at a press conference. “We take safety precautions, but sometimes, unfortunately, sometimes it just doesn’t work out.”

Figures from the National Fire Protection Association (NFPA), a non-profit organisation, show that the Arizona deaths are the worst firefighter fatalities from a wildfire since 29 firefighters died fighting a blaze in Los Angeles’ Griffith Park in 1933.

Sunday’s deaths also mark the largest loss of firefighter lives on US soil since the 9/11 attacks on the World Trade Centre, when 340 firefighters were killed, according to NFPA statistics.