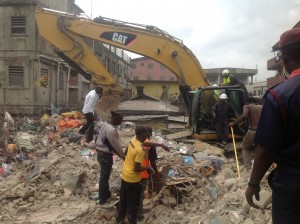 Following the collapse of a storey building in Ebute Metta area, this past week, which killed at least eight persons, 20 new buildings in Ebutte Metta, Yaba Local Coucil Development Area, LCDA, have now been identified by Lagos State Government to be distressed and marked for demolition.

Disclosing this yesterday, during a sensitisation and awareness campaign by the agency in Ebutte Metta axis of the state, Managing Director of Lagos State Building Control Agency, LASBCA, Mrs. Abimbola Animashaun, said: “Since the commencement of the enlightenment exercise today, we have identified about 20 buildings, apart from the one that we have identified before.

“Out of these, we have identified five that should be demolished completely because they can cave in soon. We have issued several appeal to the owners of these buildings, to conduct Integrity Test, IT, on the buildings but they weren’t yielding.

“Last week, we were in Lagos Island and this week is Lagos Mainland, to tell the residents about the need to alert the government whenever they discover any distressed or building under construction that doesn’t have any signboard to show that the state government was aware of the construction. That means the ongoing construction was done illegally.”