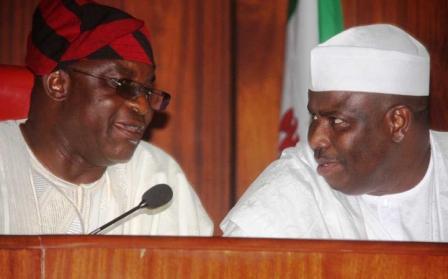 The Presidency has hailed the National Assembly for doing a good job with the passage of 2013 Appropriation amendment Bill describing it as victory for constructive dialogue.

According to the Presidency, Thursday’s action by the lawmakers was a pointer to the fact that they are on the side of the people and are working for their common good and national interest.

Making the Presidency’s position known yesterday to newsmen in Abuja, President Goodluck Jonathan’s Special Adviser on National Assembly Matters, Senator Joy Emodi, who reiterated the commitment of the presidency of early submission of the 2014 Appropriation Bill as promised, said, ‘’I wish to commend members of the National Assembly for the successes so far recorded in year 2013, especially on the issue of 2013 Appropriation (Amendment) Act and Constitution Amendment.

‘’I commend them for the eventual passing of the 2013 Appropriation (Amendment) Bill. This is indeed a boost for national development, as it will go a long way to keep the targets of the 2013 Budget on track and facilitate the actualization of the overall Transformation Agenda of this Administration.

‘’Importantly also, the passing of the Appropriation (Amendment) Act 2013 goes further to showcase the leadership qualities of President Goodluck Ebele Jonathan and the leadership of the National Assembly. Both the Executive and the Legislature have proven, once again, that they are both on the side of the people, working for their common good and national interest.

‘’The eventual passage of the amended 2013 Budget is the triumph of constructive dialogue. It underlines the virtue and virility of dialogue and cooperation in the management of executive-legislature relations in a presidential democracy.

‘’I feel highly justified by the passing of the amended 2013 Budget because against the tide of sweeping despair across the nation over the seeming intractable inter-governmental issues over gray areas in the Principal Appropriation Act 2013 and their rectification through this amended Budget, I have always believed in the National Assembly and have never hidden my faith in the capacity of both arms of Government to sort out all gray areas through the instrument of dialogue and concession.

‘’Let me reassure Distinguished Senators and Honourable members of the House of representatives that Mr. President will submit the 2014 Appropriation Bill early as promised.

“They should therefore get ready to work with the Executive, once again, to reenact the historic feat of last year by also passing the year 2014 Budget estimate into law before the start of the new fiscal year.

‘’I also commend members of the National Assembly for successfully passing the Constitution Amendment Bills. I really commend the members of the House of Representatives for their remarkable patriotism as shown in their staying up till midnight in order to conclude voting on the amendments.

There is no doubt that many of the proposed amendments will go a long way in consolidating our democracy, facilitating good governance, protecting and projecting the good governance and overall national development. Despite public skepticisms on the feasibility of the amendment, I never had any doubt that the National Assembly will put their experience to good use and accomplish this feat.”

The Presidency also expressed heartfelt condolences to the entire National Assembly and the family of late Senator Pius Ehwerido over the sad passing away of the Senator and described him as “A vibrant and patriotic Senator whose absence will be seriously felt; may his soul rest in perfect peace.”

The National Assembly members were also wished a well-deserved rest as they go on recess to get “rejuvenated and recharged for the task ahead.’’