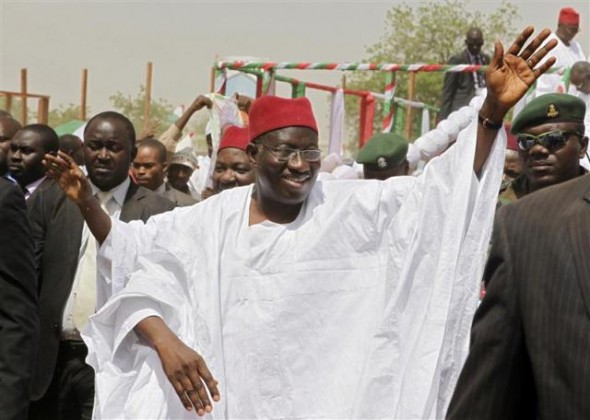 The decision was reportedly reached weekend at a meeting facilitated by the senator between the President and some Muslim scholars and leaders on his anticipated second term bid where they promised to mobilise support for Mr. Jonathan.

The report says Yerima, an All Progressive Congress (APC) chieftain arranged the meeting with the help of his associate and deputy governor of Zamfara State, Ibrahim Wakala, who served under him as the Commissioner for Religious Affairs for eight years.

A source, who was privy to details of the meeting, told Sunday Vanguard that “in 2011, the President received bloc support of Christians because they were organised.  He is trying to see how he can get the same support from Muslims in 2015. This is where Alhaji Sani Yerima came in.

“He convinced the President about his popularity among Muslim leaders throughout Nigeria.

“The former governor directed Wakala to act as the link between the Muslim scholars and the President, and to mobilise them to the meeting in Aso Rock where the President, Yerima, the Chief of Staff and Protocol Officer were present.

“There, Jonathan sought for their cooperation, which they promised to give”.

The source further added that, at the meeting, Mr. Jonathan promised to address the grievances of Muslims before the 2015 general election which includes but not limited to appointing a Muslim minister from the South into the Federal Executive Council.

The source added. “The former governor also used the meeting to strike a deal with the President. Now, the President, apart from promising to make Yerima the Minister of Federal Capital Territory (FCT) during the next cabinet reshuffle, is considering making him his running mate in 2015, owing to his perceived influence among Nigerian Muslims.  The President believes that he will be a better choice in this circumstance.

“In fact, at the end of the day, logistics support was reportedly provided for the leaders for taking time out to meet with Mr. President.”

Yerima, according to the report, “then threw in another request, advising the President to sponsor them for the Umurah, the lesser hajj, so that they can pray for the actualisation of his ambition in the holy land”.

The Sultan of Sokoto, Alhaji Saa’d Abubakar III, it was learnt, was kept in the dark about the Abuja meeting just as Vice President Sambo and the National Security Adviser (NSA), Col. Sambo Dasuki (rtd), were said not to be part of the meeting.