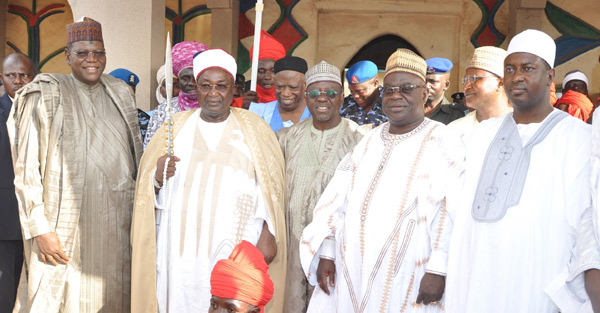 Lamido and Amaechi have been touted as Presidential aspirant and running mate respectively even though they have constantly denied nursing such ambitions and blamed the printing of their posters and its appearances in about three northern states and the Federal Capital Territory (FCT), Abuja, on mischief makers.

Governor Lamido was in Nasarawa on Thursday alongside his Kaduna, Niger and Katsina states counterparts, to sympathize with the widows and relatives of policemen and operatives of the State Security Service (SSS) slain by suspected members of Ombatse at Alakyo, recently.

The Jigawa State governor’s visit was heralded by the posters which were placed at strategic locations beginning from Mararaba; on the outskirts of the Federal Capital Capital Territory, FCT, through Keffi, Akwanga and Lafia.

The posters had the inscription: “Vote Sule Lamido/Rotimi Amaechi for President, 2015.”

The posters, which also carried the logo of the PDP as it was with previous ones, were also sighted on the wall of the perimeter fence of the party secretariat in Lafia, but were soon taken down less than 24 hours after they were pasted there by unknown persons.

Reacting to the presence of the campaign posters in the state, John Mark Yohanna, state PDP spokesman said, “they have the right to vie for the position so long as they do not violate party’s rules. We can’t prevent them from printing and pasting their posters to campaign in the state; we can’t foreclose 2015.

“What we can do is to support our national chairman, Bamanga Tukur, who is insisting on discipline of the membership so that we do not bring chaos in a party which has remained Africa’s largest,” Madaki said.