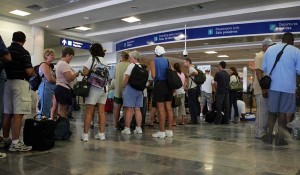 A Mexican woman who arrived on a flight from the United States has been living at the airport in the resort city of Cancun since June 30, officials say.

Marcela Silvia Montano Mancera, a Mexican citizen, is being watched by police but cannot be arrested because she has not committed a crime, Federal Police officers say.

Airport workers spotted the 45-year-old woman wandering through the terminals, sleeping on the floor, washing in the restrooms and withdrawing money from an ATM to pay for meals at the airport restaurants.

“She looks like a regular passenger at first glance, people don’t look at her, but we have seen her every day … we are not doctors, but it’s obvious that she has problems, some of my co-workers tried to speak with her, but at times it seems as if she loses it,” an airline worker said.

The woman has not caused trouble, but she walks around speaking to herself in Spanish and English, a Federal Police officer said.

A “routine inspection” found that the woman is carrying a Mexican passport in the name of Marcela Silvia Montano Mancera, who was born in the Federal District on May 2, 1968, a police spokesman said.

Officials are trying to locate the woman’s family but have not had any luck, police said.