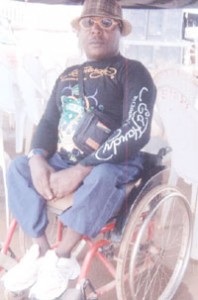 Pedro Ken Ogbebor, alias New Yorker is a 46 year-old cripple, residing by the Samuel Ogbemudia Stadium Benin City. He is one person that his disability had never hindered from embarking on any mission. Although he has not been to America before, his American accent gave him the name, New Yorker. Even as a cripple, he is popular and loved by many including women. Saturday Vanguard spoke with this father of three whose wife abandoned few months ago on why he is a fan of beautiful ladies despite his disability. This encounter was quite revealing. Excerpts:

Why do you bear the name New Yorker when you’re not from New York?

I started answering New Yorker when a friend of mine bought me a new bike. Then, a plane was flying above us at the same time, so we just said this is our plane flying to New York. So when I left there, I wrote New Yorker at the back of the bike and that was how the name became a house hold name in Benin City. In fact  people outside Nigeria know me as New Yorker and I act like a New Yorker now. That is why I always advise anybody who is  disabled not to feel ashamed, but mix up with people and make friends. Don’t allow people to intimidate you because you are disabled.
As I am now, a lot of people love me. I got married but my wife left me because I don’t have money. I have three children but since she left, I have been coping well with the beautiful children that God gave me:  two girls and a boy. I don’t feel disabled each time I see my children. They go to school and mix well with other children. If you are disabled, don’t lament too much. All you need to do is thank God for your life, give joy to people around you, tell them that your disability is not a problem to you. I always have fun with people particularly girls and I am a happy man.

How did you become crippled?
My mother told me that when I was a baby, I woke up one morning and shouted. They rushed me to hospital and gave me injection. They said it was convulsion. It was that injection that affected my waist. They said it affected my veins and ever since,I couldn’t walk. I was crawling until my mother said I should stop crawling . It was when I grew up that I asked my mother why I was disabled. That is why people should be careful where they take injection. If it was now, I would have filed a suit against the hospital that did this to me. Look at me on a wheel chair but I don’t like to lament about it. Perhaps that is the way God wants it to be and I cannot question God.

Was it because of your condition that your wife abandoned you?
I don’t really know. All I know is that when she was with me, I tried to make her happy. She was a weight lifter when I met her and we fell in love. She had three kids for me and I was shocked when she left me. Maybe, it was the advice of friends but that was foolish. If you are a woman and you love a man, you don’t allow friends to deceive you. Obviously, her friends might have mocked her that she was married to a cripple and foolishly, she forgot how we loved each other and our three children.

But I believe she is regretting her actions now because few days ago, I went to the stadium as usual and somebody told me she came to my house and was calling the children but they refused to answer her. They said my children told her that she is wicked for abandoning them because their father is a cripple and that she should go and leave them alone. That was what happened. Friends have been helping me  and my children are okay. My first daughter is 12 years old, the second one is seven years and my son is six years old.

How do you cope with sports?
The truth is that I love sports a lot but it did not favour me. I was the first black man to play wheelchair tennis in Africa. At that time, I was doing my best to sensitize people on the need to play wheelchair tennis but wheelchairs were not available then. I even told my coach then to help sensitize our people so that the rich people will help us provide wheelchairs but he did not show any commitment and that dream died. That actually demoralized me as a sportsman but today, you can see people benefiting from it. I played basketball, wheel chair tennis and table tennis but sports did not favour me.

I prayed to God to give me what would favour me because as the first disabled sportsman in the stadium here, I should have known my level now. I was a power lifter and some of the people I trained  then went to America and the UK. So at a point, I said all my friends have traveled  I am the only one here. I decided to quit the game. In fact after that time, when people would be training as weight lifters, I would be laughing at them but before I knew it, one of them traveled to America . One even got a presidential Award of MON. But I still give thanks to God because he knows the best. My only prayer now is for God to bring somebody that will help me train these children because I want them to be educated.

Since your wife left, how have you been coping with women because I found out you have a lot of female friends and people also claim you use charms to seduce beautiful ladies?
The truth is that staying with women gives joy though some people  view it differently. I feel good when I am with a woman. If you can satisfy a woman, you don’t have a problem. It is not all about money. Women like men who satisfy them. And I think I am good in that. I don’t have money to spend on a woman but I have my own way of satisfying them. Women always love me even though I am a cripple.They don’t care. Women love bold men, people who can protect them and not really money.

It is only the greedy ones that are after money. But real women search for satisfaction. No woman has ever rejected me. You can see that I am a fine boy. There was a day a white girl walking along Airport road  followed me till I got home. She gave me her numbers ,that she wanted to be my friend. So women admire me a lot despite my condition. I don’t use charms on anybody. It is all lies. You know some people would fail in getting a woman but when I succeeded, they would go about talking rubbish. I have never charmed any woman.

Let me tell you, I go to club, I party with friends and that created the impression that I may be a bad guy but I am not. People said I used charms to catch women because they noticed that any girl I talked to would always follow me. But when they now understood the kind of person I am, they no longer think that way. I don’t use charms on women at all. They love me naturally because I am gifted.

Again, I have never been involved in crime  although I am aware there are disabled persons who get involved in crime. I have never been to a police station. I am even better than some people who walk with two legs because I don’t involve myself in anything  I know  is illegal.  If I know that you are a criminal, I won’t even come close to you. I only want to do things that will give people joy, that will make people help me and not what will make people  hate me. God has always been good to me.

What would you have loved to be if you were not disabled?
I would have loved to be a pilot or naval officer. That is why I am praying for my children. I would love my son to join the Army when he grows up. My daughter can be a doctor. I know God will come to my rescue.

You have been into sports for several years now in Edo state, what is your impression with sports management in the state?
We are begging the state government to bring back Bendel Insurance. Those days, each time they played match, people would be calling me from America and London to find out the scores but nowadays, things have changed. I know that the Comrade Governor Adams Oshiomhole has tried in rebuilding the stadium and equipping it with modern facilities, but he should help us bring back Bendel Insurance which  is the pride of every Edo man. In fact, I want to use this opportunity to thank our Comrade Governor for all the assistance he rendered to me. He bought me this wheelchair and I have been enjoying it. I want to also commend him for banning Okada in the state. People have been using it to terrorize our people. Since Okada was banned, we have been enjoying peace in the state.