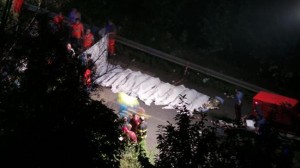 Reports vary on how many people have been killed after a bus swerved off a flyover and plunged 30m down a slope in Avellino, southern Italy.

According to a police spokesman, the total number of victims had not yet been confirmed. “We are still pulling people from the vehicle. Our priority now is to free the wounded.”

Local media put the figure at between seven and 10. Several people are understood to have been thrown from the falling bus.

Among the dozens of injured were many children, reports the local newspaper Corriere della Sera.

“The situation is dramatic,” he said, adding that the bus had struck several other vehicles before going over the embankment.

The Naples-Bari highway has been closed.
Italian news reports suggest the coach was carrying about 40 pilgrims returning from a trip.

The driver is understood to be among the dead.