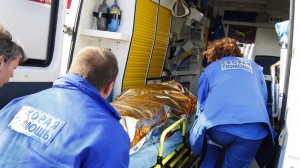 No fewer than 80 people have been injured after a Russian passenger train travelling from Siberia derailed near the Black Sea, the emergency situations ministry says.

Six people were admitted to hospital with substantial injuries while the rest were only slightly hurt, the ministry said, according to Russian news agencies.

The locomotive and first five cars of the train, which connects Novosibirsk in Siberia to Adler on the shores of the Black Sea, went off the rails and slid sideways.

The driver braked sharply after noticing that part of the tracks in Russia’s Krasnodar region was deformed by the heat, according to a security source quoted by the Itar-Tass agency.