Pastor William Kumuyi offered to resign as General Superintendent of the Deeper Life Bible Church following the controversy that trailed the wedding of his second son, John. 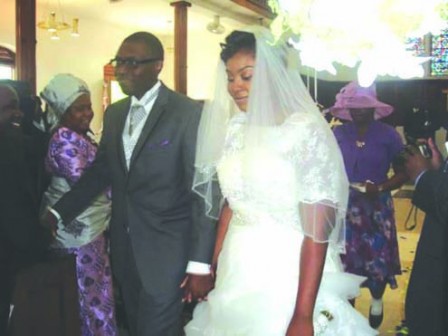 John Kumuyi and his wife, Love had engaged in acts, which negated the church’s tradition during their wedding held in Jamaica on June 15, 2013. Love, who is a daughter of the National Overseer of Deeper Life Bible Church, Jamaica, Pastor Augustine Odih, was dressed in a fitted stylish wedding gown with transparent short sleeves. She also wore makeup, jewelry and carried a bouquet of flowers. The couple cruised in a limousine and had a huge wedding cake.

The misdemeanor, which attracted widespread criticisms, had earned the newlyweds suspension from church activities despite showing remorse and tendering an apology to the church, blaming their misconduct on the fact that both of them had resided abroad for so long.

Sunday Sun gathered that the practice in the Deeper Christian Life Ministry is that if members’ children misbehave, both the children and their parents get punished on the grounds that it’s the parents’ failing in their responsibilities that made the children to err. Although the children involved in the Jamaican wedding infraction are adults, the leadership of the church regarded their action as a strong breach of its tradition, and immediately removed the bride’s father, from his position as National Overseer in Jamaica.

To demonstrate that there is no double standard in the church, it was further learnt that Pastor Kumuyi, at the meeting held by the leadership of the church on the matter, offered to resign as General Superintendent, but was prevailed upon not to.

According to the Sunday Sun source, the General Superintendent did not take kindly to the couple’s behaviour and, unlike Eli in the Bible who did not discipline his sons and incurred the wrath of God, Pastor Kumuyi had ensured that the offenders were sanctioned.