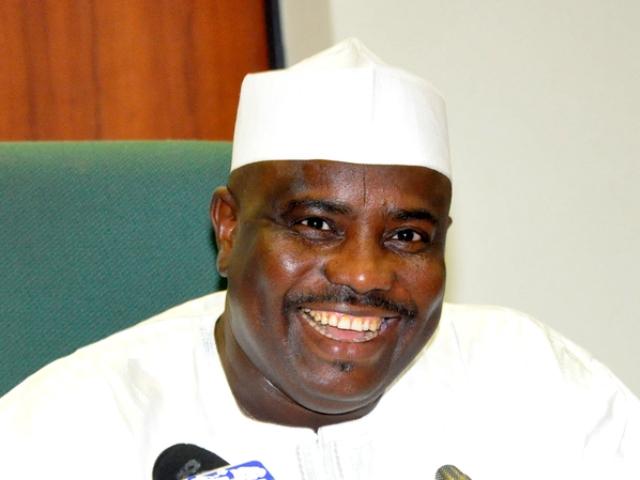 The Speaker of the House of Representatives, Aminu Waziri Tambuwal, was on Friday shunned by the Peoples Democratic Party leadership in Edo State when he visited the state.

Contrary to expectation, the Edo PDP leadership was absent at the Benin Airport to receive the No. 4 citizen but a large crowd, led by the Edo State Deputy Governor, Dr. Pius Odubu, had gathered at the airport, awaiting his arrival.

The Speaker, who arrived at the Benin Airport at exactly 10.30 am aboard an 18-seater aircraft marked 5N-LDM, was in Edo as a guest of the state deputy governor; a former two-time member of the House of Representatives, who celebrated both his birthday and the silver jubilee of his marriage, fielded questions from Journalists on some burning national issues.

In the absence of notable PDP chiefs on ground to welcome Tambuwal, other lawmakers from Abuja, including the House Minority Whip, Samson Osagie, was on hand to receive the Speaker.

The Speaker was however accompanied by two PDP (Edo) members from the House of Representatives, Friday Itulah and Patrick Ikhariale.

Reacting to the near absence of PDP members at the airport to receive the Speaker, PDP chairman in the state, Chief Dan Orbih, claimed not to be aware of Tambuwal’s visit, saying rather it was only those who were informed that went.

He said, “I am not aware that they are expecting him. If a leader is coming, I should have been there, but I was not informed and I am not aware.”

While speaking with newsmen on some national issues and his mission in the state, Tambuwal said consultations were ongoing on the 2013 appropriation bill and that Nigerians would benefit from the budget at the appropriate time.

He said, “I am here to celebrate with my brother, the deputy governor, on the occasion of the silver jubilee of his wedding and his birthday and also to pay my respect to His Royal Majesty, the Oba of Benin.”