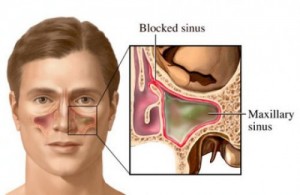 Acute sinusitis (acute rhinosinusitis) causes the cavities around your nasal passages (sinuses) to become inflamed and swollen. This interferes with drainage and
causes mucus to build up. With acute sinusitis, it may be difficult to breathe
through your nose. The area around your eyes and face may feel swollen, and you may have throbbing facial pain or a headache.
Acute sinusitis is most often caused by the common cold. Other triggers include allergies, bacterial and fungal infections

Symptoms
Acute sinusitis symptoms often include:
1. Drainage of a thick, yellow or greenish discharge from the nose or down the back of the throat.

2. Nasal obstruction or congestion, causing difficulty breathing through your nose

3. Pain, tenderness, swelling and pressure around your eyes, cheeks, nose or forehead

4. Reduced sense of smell and taste

5. Cough, which may be worse at night

Other signs and symptoms can include:
Ear pain

Aching in your upper jaw and teeth

Causes
Acute sinusitis can be caused by:

1. Viral infection. Most cases of acute sinusitis are caused by the common cold.

4. Allergies such as hay fever. Inflammation that occurs with allergies may block your sinuses.

5. Nasal polyps or tumors. These tissue growths may block the nasal passages or sinuses.

6. Deviated nasal septum. A crooked septum — the wall between the nostrils — may restrict or block sinus passages.

7. Tooth infection. A small number of cases of acute sinusitis are caused by an infected tooth.

Most cases of acute sinusitis don’t need treatment because they’re caused by viruses that also cause the common cold. Self-care techniques are usually the only
treatment needed to speed recovery and ease symptoms.

Treatments to relieve symptoms
Your doctor may recommend treatments to help relieve sinusitis symptoms, including:

1. Saline nasal spray, which you spray into your nose several times a day to rinse your nasal passages.

Nasal sprays include oxymetazoline (Afrin, others). These medications are generally taken for only a few days at most. Otherwise they can cause the return of more severe congestion (rebound congestion).