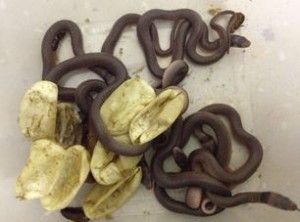 A little boy thought he was just collecting innocent looking eggs he found while playing outside, but they turned out to be extremely dangerous, according to press reports.

An Australian boy, who is 3-years-old, was lucky to escape unharmed after his egg collection turned into a tangle of deadly slithering snakes.

Reptile specialist Trish Prendergast said Friday that young wildlife enthusiast Kyle Cummings, could have died if he had handled one of the eastern brown snakes, the world’s most poisonous species on earth after the Australian Taipan.

Kyle found nine eggs on the grass on the 3 acres of family property on the outskirts of the city of Townsville in Queensland state, Prendergast said. He had no idea what kind of eggs they were.

He put the eggs in a plastic food container and hid them in his bedroom closet, where her mother, Donna Sim, found them on Monday. Seven eggs had already hatched, but the snakes were trapped under the lid of the container. The other two eggs were infertile and probably were rotten, Prendergast said.

“I was pretty surprised, especially since I do not like snakes,” Sim told the local newspaper. Prendergast received the container on Tuesday and released the snakes into the wild that night. She was relieved that no one had touched the snakes.

“Their fangs are only a few millimeters long at that age, so it probably could not break skin, but are just as poisonous as snakes that are fully developed,” Prendergast said.
“If it had touched Kyle, where he had a cut or put it in his mouth, it could have been fatal,” Prendergast added.