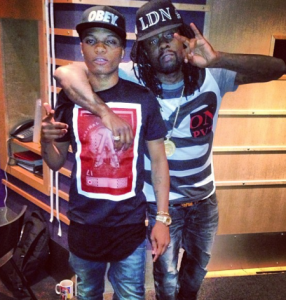 I reported yesterday that MMG rapper Wale tweeted about meeting up with Star-Boy Wizkid at London.

The two hooked up and hung out in a club in London.

Wizkid decided to show Wale that he also had a gangster side, according to a tweet by the MMG rapper, Wale – Wizkid threw his drink on a man who was acting up inside a London bar.