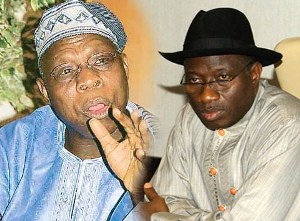 Governor of Akwa Ibom State and staunch ally of President Goodluck Jonathan, Godswill Akpabio, on Thursday, met with former President, Chief Olusegun Obasanjo behind closed doors to deliberate on the internal wrangling among the governors of the ruling Peoples Democratic Party (PDP).

It was learnt that the governor also used the meeting to solicit Obasanjo’s support for the President’s reelection in 2015.

Akpabio, who is chairman of the PDP Governors’ Forum, was said to have appealed to the former president to use his clout in resolving the differences among the governors, noting that if left unresolved, the acrimony may jeopardize the party’s chances at the 2015 polls.

Information Nigeria recalls that since the outcome of the May 24th Nigeria Governors’ Forum election, which was won by Rivers State Governor, Rotimi Amaechi, the  PDP governors have further drifted apart with accusations and counter-accusations of betrayal.

At the meeting, which was also attended by a PDP chieftain, Otunba Oyewole Fasawe, the former president was said to have listened attentively to Mr. Akpabio as he solicited his intervention to repair the damaged relationship between the President Jonathan and the governors.

Though the former President was said not to have made any commitment, it was gathered that Akpabio was working towards bringing Obasanjo and Jonathan, who have become estranged, to the table to discuss.

Akpabio, a known associate of the former President, was said to have expressed his worry on how Mr. Obasanjo isolated himself from the activities of the PDP.

A source privy to the meeting which held at the Transcorp Hilton Hotel said, “It was a brief meeting, where the former President listened with rapt attention as Akpabio spoke. But unexpectedly, he did not make any commitment.  But I think that President Jonathan would want to meet with the former President.”

The former president reportedly left for Zimbabwe immediately after the meeting..