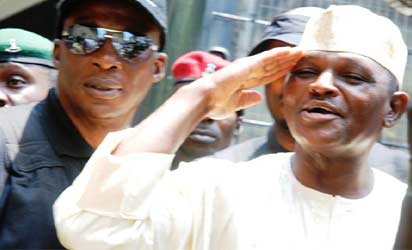 Former Minister of the Federal Capital Territory (FCT) in the administration of General Sani Abacha, Lt. General J.T Useni, has advocated payment of compensation to Major Hamza Al-Mustapha for being incarcerated for 14 years.

The former Minister, who was reacting to the Court of Appeal ruling which absolved the former Chief Security Officer to late Gen. Abacha of any guilt in the murder of Alhaja Kudirat Abiola, wife of the presumed winner of the 1993 presidential election, Chief Moshood Kasimawo Olawale (MKO) Abiola, said: “The judgment is good. For keeping him under lock and key for 14 years, I think people should be happy that he has gained his freedom in the end. So, I am happy and commend the courage of the Court of Appeal for the action it has taken. I congratulate Major Mustapha for his freedom.”

On the effect of the judgment on the nation, Gen. Useni said it was just; saying that no matter how long one had been in incarceration, one day the person must regain freedom.

Useni stated: “Once you believe in God and trust Him, you will one day regain freedom. Some people it might be one month and they are discharged. How can you account for the 14 years you have put this chap under lock and key? So, apart from being discharged, he should even be compensated for all those years lost.”

However, he urged the judiciary to ensure that it looked at every case in detail before passing judgment.