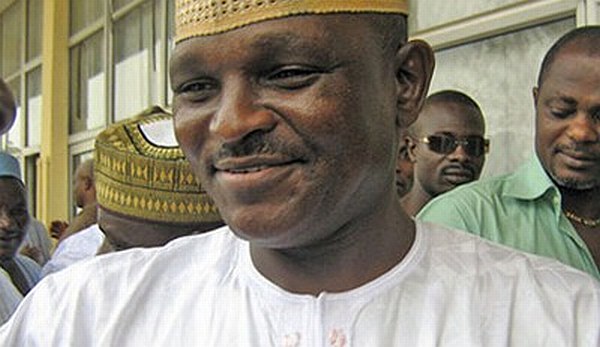 Al-Mustapha broke down at the Kano State Government House while recalling his ordeal at the Kirikiri Naxunyn Security Prison, Lagos.

The former CSO was detained  for about 15 years over the alleged murder of  the late Mrs  Kudirat Abiola, wife of the late Alhaji Moshood  Abiola, the acclaimed winner of the June 12, 1993 presidential election.

Kwankwaso said, “Hamza Al-Mustapha was taken away in 1999 in tattered clothes and in chains under a pitiable situation; but today, he has returned a hero. We have always insisted that he was unjustly held. We felt concerned and decided to be part of justice.”

The former CSO  was in the Government House   along with members of his family and close associates, including the Founder of the Oodua People’s Congress, Dr. Fredrick Fasehun.

He told Kwankwaso that he was a victim of trumped-up charges.

In an emotion-laden speech, Al-Mustapha, who was released via the Court of Appeal judgment  on Friday, regretted that he was returning to an empty home.

He said he lost   both parents while in detention.

He stated, “I must say that I lost my father and my mother, whom I was forced to see only two times in 15 years.

“Even when the court forced the authorities to allow them to set my eyes on them, the approvals of the court were flagrantly refused. And I was kept and punished the more just as a ploy to ensure that I did not set eyes on my parents.

“Things we went through are things that I cannot sum up anywhere, but all I can say is that yesterday is gone.

Those who have perpetrated what they did against us have done it in their own deductions, analysis, feelings but to us yesterday is gone. We have drawn a line and we have forgiven them. We are forging ahead to set examples.”

Al-Mustapha commended Fasehun, describing him as a detribalised Nigerian.

He stated,  “I have found a father—highly dogmatic, a senior citizen of this country, a detribalised elder, an intellectual, a person that is a father indeed with a wide shoulder and a big hearts  a man that is very reliable, responsible, dependable, Dr. Fredrick Fasheun.”