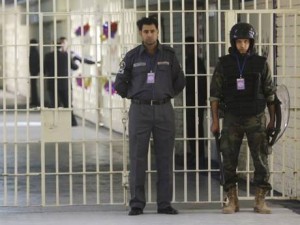 An Al-Qaeda group claims it carried out brazen assaults on Iraqi prisons that freed hundreds of militants and killed more than 40 people.

The attacks on the prisons in Abu Ghraib, west of Baghdad, and Taji, north of the capital, illustrate both the growing reach of militants and the deteriorating security situation in Iraq.

Spiralling violence in Iraq has killed more than 620 people so far in July.

“The mujahideen (holy warriors), after months of preparation and planning, targeted two of the largest prisons of the Safavid government,” said a statement signed by the Islamic State of Iraq and the Levant, using a pejorative term for Shi’ites.

The statement said “hundreds” of inmates, among them 500 militants, were freed in the attacks.

It also said the operation was the final one in a campaign aimed at freeing prisoners and targeting justice system officials, which was called for in an audio statement attributed to the group’s leader, Abu Bakr al-Baghdadi, last year.

The statement, posted on a jihadist forum, came as security forces hunted intensely for the escapees, said by MPs to number at least 500, before they are able to rejoin the ranks of the militants.

“Dark days are waiting for Iraq. Some of those who escaped are senior leaders of Al-Qaeda, and the operation was executed for this group of leaders,” a senior security official said on condition of anonymity.

“Those who escaped will work on committing acts of revenge.”

In what appears to have been a carefully planned operation, militants waiting outside the prisons launched their attacks after inmates inside began rioting.

Militants then attacked with mortar rounds, bombs and gunfire, sparking clashes with security forces that raged for 10 hours.