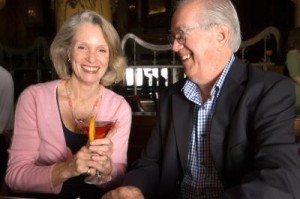 Consuming a low to moderate amount of alcohol regularly has been shown in a 20-year long study of the elderly in the rural New South Wales, Australia town of Dubbo to reduce death rates from all causes by between 20 per cent and 28 per cent.

The research covering more than 2800 non-institutionalised people over the age of 60 also found that any regular alcohol intake at that age reduced the risk of dementia during the following 20-year period by about 50 per cent.

Findings from the Dubbo Study were presented yesterday by its principal investigator and University of NSW associate professor Leon Simons at the international WineHealth13 conference in Sydney.

“We might have expected increased dementia with alcohol use, but in the Dubbo elderly their drinking levels weren’t extraordinarily high and probably typical in senior citizens generally,” Professor Simons said.

Senior citizens are not generally heavy drinkers, he said.

Beer was the tipple of choice for 87 per cent of the men and 44 per cent of women, and the rest drank wine or spirits.

The study didn’t distinguish between the kind of alcohol consumed, and the results combined data from both genders with the same broad conclusions applying to both.

While the report didn’t distinguish between the amounts of alcohol intake, the statistics compared any alcohol versus none.

Guidelines suggest moderate consumption is a maximum of two standard drinks daily for men and women.

It is considered that the lower mortality rates are due largely to the effect regular moderate alcohol consumption has on reducing the risk of cardiovascular disease.