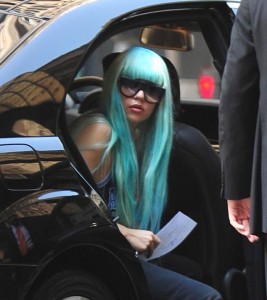 Amanda Bynes is a hyper-paranoid pothead who’s blowing through her life’s savings and “cabbed it” from New York to Los Angeles before lighting a neighbor’s driveway on fire, her parents said in a petition to take control of her finances.

Parents Rick and Lynn Bynes were in court Friday seeking a temporary conservatorship, but the judge postponed any decision saying he first wanted a personal “dialogue” with the troubled actress.

Judge Glen Reiser said Amanda wasn’t in a coma and there was no doctor with “a scalpel in hand” waiting for his ruling, so he wanted to take his time while she’s undergoing a forced psychiatric evaluation that was extended Thursday to two weeks from 72-hours.

“This is not a case where there’s an emergency right now, and because conservatorships of the person and estate involve liberty and property interests, there are a lot of t’s we need to cross and i’s we need to dot.”

Bynes’ parents Rick and Lynn Bynes agreed to return Aug. 9 after spelling out their grave concerns in a filing made public after the Friday hearing.

“We are deeply concerned that Amanda poses a substantial risk to herself, to others and to property based on recent events in her life,” the petition to make Lynn her sole conservator reads.

They say they have no idea how Amanda, 27, traveled to southern California from New York last week or where she was staying prior to starting the gasoline fire in their sleepy Thousand Oaks, Calif., neighborhood that led to her forced hospitalization.

She was last spotted in New York on July 17 and arrived in Southern California three days later.

Her parents said she has no driver’s license or formal identification and claimed she “cabbed it” across country.

We believe she is essentially homeless,” the filing states.

They claim Amanda was “extremely paranoid” about being “watched” when she lived in their residence, covering smoke alarms with towels, taping windows shut and covering her car’s dashboard with cardboard and tape out of fear that “cameras were watching her.”

Amanda also has profound body image issues, calls family members including her young niece “ugly” and may be submitting herself to dangerous cosmetic procedures, the parents claim.

The Bynes family is being represented by Tamar Arminak, who is pictured arriving at Ventura Juvenile Court on Friday morning.

According to the filing, Amanda has written $63,000 in checks since May 3 and made bank withdrawals of $100,000 on June 4 and July 2 to fund her drug dependency and erratic behavior.

“We have received large doctor bills for purported services to Amanda from doctors that we do not know for unspecified services,” they say in the filing. “We are informed and believe that a substantial amount of thi smoney is being used to pay for marijuana.”

The parents claim Amanda had amassed $4 million in savings but has spent some $1.2 million in a “very short amount of time.”

They are asking the court to give Lynn temporary control of Amanda’s personal and financial matters, highlighting accounts that Amanda lit her pants on fire during the Monday night fire and injured her pet Pomeranian.

Judge Reiser said he didn’t want to rush the issue.

He appointed Ventura County Public Defender Mary Shae as Amanda’s lawyer and asked her to meet with the former Nickelodeon star and prepare a declaration.

A young woman believed to be Amanda Bynes is wheeled outside of a Los Angeles-area psychiatric ward where the actress is being treated.

“My assumption is that you would want an opportunity to speak to your client?” Reiser asked Shae

Reiser also ordered an independent investigator to prepare a report. He said he had “every expectation” that Amanda would make it to court with Shae after her release from Hillmont Psychiatric Hospital in Ventura.

Lynn’s lawyer Tamar Arminak said it was her understanding that Bynes had a habeas hearing at Hilltop set for Friday afternoon on the subject of her forced detention.

The judge said if Bynes is released before the end of her current two-week hold, either side could ask for an emergency hearing.

Arminak also said that Amanda’s hospital did not allow her to give the former child star formal notice of the Friday hearing.

“The facility she is in monitors what goes in and out and they did not allow us to serve her,” she said.

The judge asked Shae to help with matter or waive the requirement for five days of notice.

The judge also said Lynn Bynes also was obligated to serve all of Amanda’s first and second degree relatives with her court filings.

“We’ll have the luxury of two weeks in this case,” Judge Reiser said.

The Friday hearing was mostly procedural and did not cover the purported mental health issues at the center of the case – in large due to laws protecting against the release of private health information in a public courtroom.

Sources told the Daily News Thursday that Amanda’s doctors “need more time” to understand the nature of her illness.

Lynn’s petition for the temporary conservatorship did not indicate that a diagnosis of schizophrenia has been made, a source to the News.

The “Easy A” actress has been on a downward spiral since a DUI arrest in West Hollywood last year. She allegedly tossed a bong out of a 36th floor Manhattan apartment in May.

She was charged with reckless endangerment, attempted tampering with physical evidence and unlawful possession of marijuana.