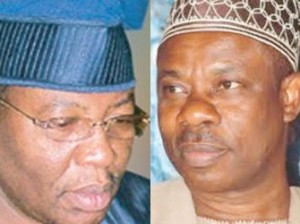 The funeral service for the late mother of the Special Adviser to President Goodluck Jonathan on Media and Publicity, Dr. Reuben Abati, which held at St. John’s Anglican Church, Isale Igbein, Abeokuta, was on Friday turned to a political popularity testing for Governor Ibikunle Amosun of Ogun State and his predecessor, Otunba Gbenga Daniel.

It all started when the officiating minister and Bishop of Egba Diocese, Rt. Rev. Emmanuel Adekunle, invited the son of the deceased to the pulpit to deliver his speech.

Abati, in the course of his speech, recognised the dignitaries who were present in the church, including the former Secretary General of the Commonwealth, Chief Emeka Anyaoku; the Minister of Information, Labaran Maku; Chief of Staff to President Jonathan, Mike Oghiadomhe; Ibikunle Amosun and former Governor Daniel.

When Abati recognised the former Ogun State governor, a deafening applause rented the church’s atmosphere. The applause for Daniel went on for some minutes and Abati had to pause for a while to allow it to subside before he could proceed with his speech. Shouts of “OGD, OGD, OGD” in the church hall also followed the applause.

Immediately after Abati’s speech, Amosun, who took over the pulpit, vehemently expressed his disgust at the loud ovation that greeted the church’s atmosphere when Daniel’s name was mentioned.

Amosun, who did not recognise Daniel while acknowledging dignitaries in the church, however, drew Abati’s attention to what he described as “politics in the church.”

The governor wondered why supporters of politicians would turn the church into a campaign ground.

He urged the clergy to always use the advantage of the pulpit to educate politicians to play their game outside the vicinity of the church, stressing that such kind of politics was not what the late sage, Chief Obafemi Awolowo bequeathed to the people of the South-West.

Amosun said, “I have listened to the sermon of the presiding Bishop, Emmanuel Adekunle; when I was called here, I saw that our people were clapping, but I didn’t know that Reuben had become a politician because I discovered that there is politics going on here.

“This is the first place in Nigeria where we had the first church and the first Bible; so, we should do everything to keep that proud legacy.

Churches are not where we turn to campaign ground, this is Ogun State.

“Popularity is tested not inside the church but on the street, in the market where the masses are. Coming to church where people clap; it is not of Ogun standard; this is Ogun State, we should not do that here.”

Earlier in his sermon, Adekunle urged the government and the Independent National Electoral Commission to carry out a compulsory medical test to ascertain the mental status of every political office seeker before their assumption of office.

Apparently referring to the political crisis in Rivers State, where members of the state House of Assembly reportedly used the mace to fight and injure one another, Adekunle recommended that the government and INEC should ensure that political office seekers present their certificate of psychiatric fitness before being allowed to vie for any position.

President Goodluck Jonathan, in a speech at the funeral service, urged mothers across the country to provide good training for their children to ensure a peaceful society.

Represented on the occasion by Oghiadomhe, the President lamented that lack of good upbringing on the part of mothers was responsible for all the vices currently being experienced and which had manifested in the security challenges confronting Nigeria.

Jonathan described Abati’s mother as an epitome of good motherhood as evident in the character of his son. [Punch]