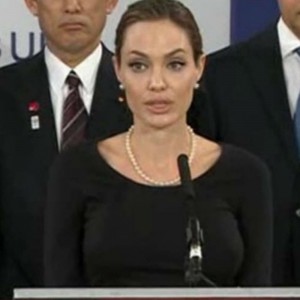 Hollywood star Angelina Jolie has urged a Japanese audience to join her fight to stop sexual violence in war zones.

Jolie said she hoped In the Land of Blood and Honey, her first film as writer and director, would inspire viewers to think about r*pe in war.

In April, the Group of Eight leaders agreed to work to end r*pe and s*xual violence in conflict and the United Nations Security Council adopted text urging sanctions against perpetrators of s*xual violence during armed conflict.

“This is just a beginning,” she said.

“Our aim must be to shatter impunity, so that rape can no longer be used as a weapon of war anywhere in the world as it was in Bosnia, and as it is today from Congo to Syria.”

Jolie, who serves as special envoy for the UN High Commissioner for Refugees, was speaking at a special screening event on Monday at the UN University in Tokyo, as part of her campaign launched with British Foreign Secretary William Hague.

Jolie said she hoped her film would inspire the Japanese viewers to think further about the problem and take action, just as the campaign had taken her across the globe.

“When I started down the road, making this film, I thought only of telling a story and doing my best to try to give a voice to survivors,” she said.

“But today I am here not only as a director, but as a campaigner, and a part of a global effort that is growing every day.”

Japan is no stranger to sexual violence at war.

The country still has problems fully coming to terms with what its militarist government did to hundreds of thousands of Asian women before and during World War II – by forcing many of them to become “comfort women” and provide sex to Japanese soldiers. The issue remains a major diplomatic problem between Japan and South Korea.

Jolie did not comment on the “comfort women” issue.

Jolie’s award-winning 2011 film about the war in Bosnia hits Japanese cinemas on August 10.
The fictional tale of a romance between a Bosnian Serb man and a Bosnian Muslim woman, set during the Balkan war in the 1990s, won the Producer’s Guild of America’s Stanley Kramer Award.