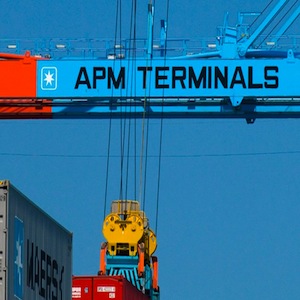 Operations of APM Terminals, the largest container terminal in West Africa, was at the weekend shut down by workers, as the Maritime Workers Union, MWUN, threatened to make the operations of the company in Nigeria unprofitable if the management continued with its alleged unfair practices against Nigerian workers.

The management of the company has however declared the industrial action by the workers backed by their union illegal.

The union and APMT, it was gathered, have been in running battles for a while over improved conditions of service for workers. Things were said to have gotten to a head during negotiation for increase in allowances and other benefits.

However, at the time of this report, Vanguard gathered that parties were making frantic efforts to resolve the matter because of the huge losses the company was said to have incurred as a result of the shut-down.

Confirming the shut-down, President-General, MWUN, Anthony Emmanul Nted, said the management shut down the operations on Friday after the workers started “a slow of work” protest against the management over protracted negotiation for improved conditions of service which began in April 2013.

He accused the management of treating Nigerian workers as sub-humans and infringing on their rights at will.

According to him: “When it was time to review the condition of service for our members, we met with management in April this year and they said the education subsidy and other subsidies they are offering will be deducted from workers’ salaries.

“This, we said, is unacceptable. This negotiation has protracted for a long time and workers have become restless. That is why we embarked upon a work-to-rule action which is intended to slow down production.

Until we get the agreement, the terminals will remain shut. The company is making a lot of money, but yet they treat our workers with impunity, like slaves and sub-humans.

“APMT discharges not less than 420,000 containers every year and generates over $7 billion yearly, but yet they cannot take care of their workers. Rather, they repatriate the profit to their country.”

He decried the hazardous environment under which members (especially those working in the cranes) were exposed to blaming it to the failure by management to put in place occupational safety and health measures in the workplace.

Nted lamented that that management was frequently threatening the workers with dismissal and termination of their job at will thereby making the work environment unfavoufable for workers.

He blamed the Nigerian Port Authority, NPA, and other regulatory agencies for alleged failure to carry out their oversight function of ensuring that APMT adhere strictly to the laws on port concessioning and operations in the sector. [Vanguard]