Residents of Akure, the Ondo State capital recently heaved a sigh of relief after the Anti-Robbery Squad of the Ondo State Police Command arrested several armed robbery suspects who had been snatching vehicles and dispossessing their victims of other valuables. 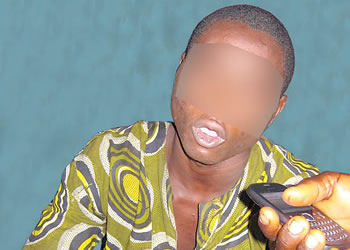 Among the suspects currently undergoing interrogation at the SARS office are Tobechukwu Aguonu a.k.a. Alhaji Seriki Thunder and Uche Igwe. It was gathered that the two suspects, along with one Chinedu (surname unknown) invaded the premises of their latest victim’s house at about 11 p.m. on Wednesday, July 3 where they hid until about 3a.m. on July 4 when they struck.

Police sources told Crime Reports that the gang gained entrance into their victim’s residence by using an iron cutter to cut the burglary proof. They also reportedly fired two rounds of ammunition to tell their victims that they meant business and needed their cooperation. Notwithstanding, they still injured the man of the house in the mouth with the iron cutter, after which they collected phones, cash and the key of his Nissan Pathfinder SUV along with the documents.

The gang was said to have headed for Ihiala, in Imo State, with the vehicle. On getting to Onitsha, Chinedu, who was alleged to be the mastermind of the operation, got down from the vehicle, with the excuse that he needed to purchase some things.

Unfortunately for them, they were stopped along Owerri Road in Anambra State for a checkup by federal highway patrol team. When they could not give a satisfactory explanation of how they came about the vehicle, the patrol team decided to conduct a search which turned out to be revealing.

They were said to have discovered a driver’s licence and a call to the number on the licence led to a startling discovery. The speaker at the other end told the policemen that he was robbed of his vehicle in the early hours of same day.

Aguonu and Igwe were promptly arrested and transferred to the Ondo State Police Command where the SARS operatives had been interrogating them on their criminal activities. Speaking with Crime Reports, one of the suspects, Igwe, who drove the vehicle, said that he was only hired as a driver and never knew that the vehicle was stolen. However, Seriki Thunder, said that Igwe was with them on the day their victim was attacked, though he confessed that they hired his services to drive a vehicle shortly before going for the operation.

Seriki Thunder also revealed many criminal operations he had been involved in, saying that he used to join different gangs for robbery operations. He also said that some of his gang members were dead while others were in the prison or police cell. Twenty-seven-year-old Seriki Thunder was described as a commander of the robbery gang and alleged to be deadly.

Police sources also informed Crime Reports that a man was robbed of his unregistered Toyota Camry (popularly called Muscle). On the fateful day, the man wanted to enter his premises and the gate was opened for him by a member of his household. The gang members reportedly closed in on him, drawing their guns.  They collected the car but with painstaking investigations, the Ondo SARS operatives were said to have recovered it in Port Harcourt.

Below are the excerpts of their interview with Crime Reports:

Uche Igwe (22), from Ebonyi State
“I have been living in Akure for two years. I am a commercial driver plying Ondo-Akure—Ore route. On that day, I was at Ondo garage when I saw two men who approached me and said they needed a driver to take a vehicle to Anambra State. I asked for the vehicle and they pointed at a Nissan Pathfinder SUV where it was parked nearby. I told them I was a driver and they sought verification by saying that I should show them my driver’s licence. I did and we negotiated my fee to N7,000.

“On the way, we were stopped by federal highway patrol police. After showing them my licence, they asked for the particulars and I told them to ask the occupant. He showed the police the documents but while searching the interior of the car, the police found a driver’s licence and asked for the owner. The person in the vehicle told the police that it belonged to his brother.

“The police called the number on the licence to confirm but was taken aback when the man at the other end told them that the vehicle was snatched from him that morning. That was how I was arrested with Alhaji Seriki while the other person, who disembarked at Onitsha, escaped.”

Tobechukwu  Aguonu a.k.a. Alhaji Seriki Thunder
“I am from Imo State. I came to Ondo State in 2005. I was selling pants and singlets in Ondo before joining robbery gang. The gang usually met at old Garage. I have been to several robbery operations with the gang. I knew Sina through Alhaji Soko who has been killed during an exchange of gunfire with the police when he went for an operation. Alhaji Soko was actually from Ihiala Local Government in Imo State.”

“I was one of the gang members that used to block the highway at Ilara-Mokin junction along Ilesa-Akure highway. Other gang members’ names are Isaac, Berry, Sola, Sunny etc.”

Confirming the case, the Ondo State Commissioner of Police, Patrick Dukumor, said that the suspects would be charged to court after the completion of investigations.