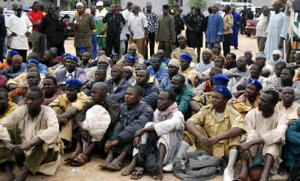 42 suspected members of Islamist sect Boko Haram were yesterday paraded in Lagos by the Nigerian Army after being arrested in their hideouts in Lagos and Ogun states.

Some of the paraded suspects confessed to have fled Borno State for the western part of the country following the ongoing military onslaught on the sect.

Others confessed to have killed soldiers and civilians in the northern parts of the country.

The General Officer Commanding 81 Division, Major General Obi Umahi, while parading the suspects before newsmen, stated that the suspects were arrested following intelligence report on the migration of some members of the sect to the South, from the operation’s commander in the South-Eastern part of the country.

He said based on this information at the division’s disposal, a coordinated raid was carried out in some criminal hideouts in Ogun and Lagos states.

“The Command organised and carried out raids in conjunction with intelligence operatives in various parts of these states.

“The Boko Haram members’ influx is adduced to plans to unleash terror in some parts of South-West, which includes 81 Division’s area of responsibility.

“The raids were conducted from 12 to 23 July in various hideouts in Lagos and Ogun states, which are fast becoming Boko Haram enclaves.

“They all admitted to be members of the sect and also said they had participated in some deadly Boko Haram operations,” Umahi said.