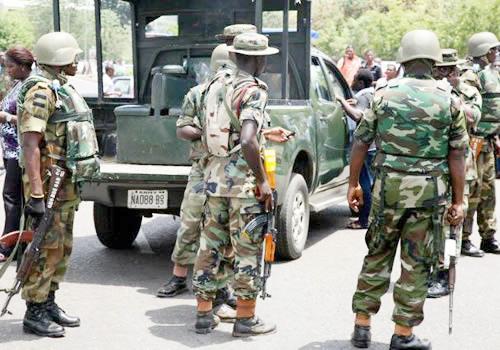 A suspected terrorist has been killed in Sokoto after a shootout with soldiers and operatives of the State Security Services (SSS) on Thursday, the News Agency of Nigeria (NAN) reports.

Brig.-Gen. Tasi’u Ibrahim, the Commander, 1 Brigade, Nigerian Army, said the suspect was killed in the operation which lasted for about six hours at Gidan-Dare, near Kalambaina area of the city.

He also said one suspect was captured alive, while 11 members of the suspects’ family, “were rescued and secured”.

Ibrahim told a press conference in Sokoto after the operation that, six of those rescued were children while five were women, adding also that two of the women were pregnant.

“The pregnant women are now receiving ante-natal care at the Brigade’s clinic,” he said.

The commander disclosed that the joint operation was carried out following a tip-off, adding, “The house was being used as a terrorist hide-out”.

“The operation was clinically and carefully carried out in line with the existing global rules of engagement,” he assured.

Ibrahim listed some of the weapons recovered from the house to include: Six AK 47 and one pump action rifles, 13 IED Prima clocks and an Abuja vehicle plate number, EL 295 ABJ.

“These groups of people do not wish Nigeria and the state well. In this Holy month of Ramadan one may wonder how these people are bent on breaching the peace.

“All well meaning and law abiding Nigerians will continue to be protected and secured. The Army will make every effort to ensure that the innocent do not suffer,” he said.

NAN reports that the house was immediately demolished and set ablaze after the operation.