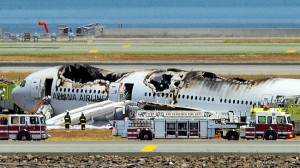 The death toll from the Asiana Airlines plane crash in San Francisco rose to three on Friday as a girl in critical condition died.

Details about the third victim would not be released per the family’s request, the Seoul-based carrier said in a statement on Saturday. Asiana CEO Yoon Young Doo apologised for the loss in the statement.

Two other victims, 16-year-olds Ye Meng Yuan and Wang Lin Jia of China, who were on their way to a summer camp in the United States, died at the crash site. More than 300 people survived the July 6 wreck at San Francisco International Airport, the first fatal airline accident in the United States since 2009. It was Asiana’s first crash since a Boeing 747 cargo plane went down at sea in July 2011.

The San Francisco Police Department separately said on Friday it verified that a fire truck hit one of the two victims who died at the scene, as the fire department had suspected.

That victim was covered in fire-retardant foam, lying prostrate on the ground near the fuselage, Gordon Shyy, a police spokesman, said in a telephone interview on Friday. Shyy said he didn’t know which victim was struck.

“We do not know that the fire truck was the actual cause of death,” he said.

The Asiana Boeing 777 struck a seawall short of a runway, slammed to the ground and spun off the tarmac.

Damage to the aircraft ranged from imperceptible near the front to severe at the rear, which hit the barrier and where the people killed and most severely injured were sitting.

The safety board is looking into why the plane slowed to almost 64 kilometres an hour below its target speed before striking the seawall, Hersman has said. A cockpit warning of an impending aerodynamic stall, the point at which a plane loses the lift needed to stay in the air, sounded four seconds before the crash.

There were two calls by pilots to abort the landing — the first made three seconds before the plane hit the barrier and the other 1.5 seconds later.

Asiana published a letter of apology in China’s official People’s Daily newspaper. The airline said it would make every effort to win back the trust of the Chinese people. Of the 291 passengers on the flight, 141 were Chinese, Asiana has said.